[The Dish] Amore Galore for the Seafood Cataplana 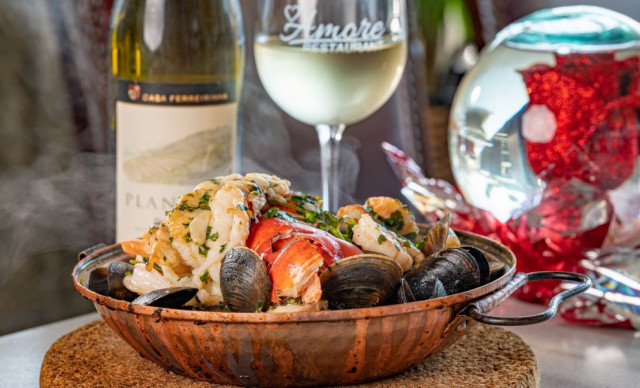 Tracking down authentic Portuguese cuisine is not an effortless task in Sarasota-Manatee, and even the best purveyors aren’t always overtly on the radar. Case in point: Amore Restaurant in Sarasota.

Titularly, this locale conjures up images of Italian food, but half of the menu is actually Portuguese. Here, owners Tito and Liana Vitorino serve a signature dish called the Cataplana de Marisco (Seafood Cataplana) with lobster tail, shrimp, clams, mussels, calamari with red bell peppers, onions and sliced boiled potatoes in a seafood broth. The Portuguese entrée is named after the copper pan in which it is cooked and served.

According to Tito Vitorino, who is also Amore’s chef, “Portuguese cuisine can be the simplest of Mediterranean to the earthy and eccentric of Brazil, Mozambique and Macua (thanks to the 15 th -century Portuguese explorers and the new ingredients they discovered during the Great Navigations).” Fascinating! And, while Portuguese cuisine is world-famous, many people still aren’t aware of the impact Portugal has had on worldwide fare. Other Portuguese delicacies at Amore include the salted cod and a Portuguese sausage that is flame-grilled right at the table.

Both Tito and Liana Vitorino—who previously ran the Amore on Longboat Key—are originally from Portugal, and they grew up within five miles of each other. They’re continuing to make regulars fall in love with both Italy and Portugal, all in one sitting, without ever leaving the Florida table.