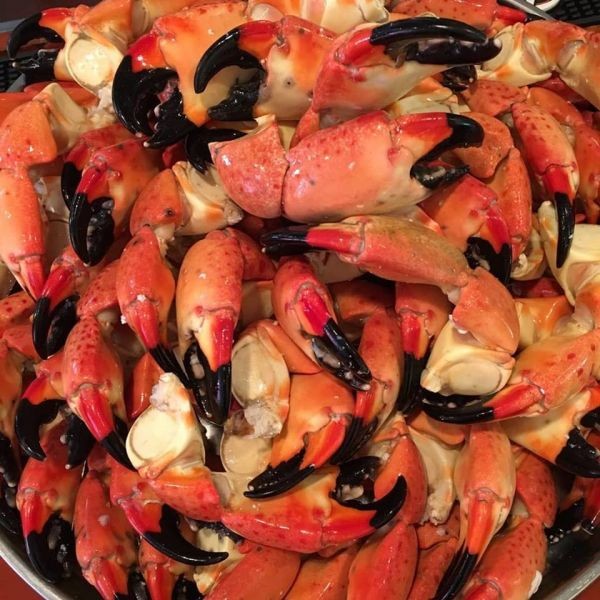 Considered to be one of the most delicious crustaceans of the world, the anticipation of the opening of stone crab season on October 15 and thoughts of their sweet succulence and rich, snowy white meat has our mouths watering!

From October through May, Florida's recreational and commercial stone crab claw season is on. Local commercial fishermen start pulling stone crab traps Tuesday morning and many of our area restaurants will be offering these tasty crustaceans the same day.

Our favorite Menippe mercenaria hails from the warm waters of the Gulf of Mexico, though he counts family as far north as North Carolina in the Atlantic and as far south as the Caribbean. Born in shallow sea grass beds, our stone crab burrows into the protective sandy bottom and moves into deeper waters as he matures. He is always seeking the protection of rocks, shells and sponges.

Catching one of these tasty creatures is more difficult than it appears. Fishermen in search of stone crabs set traps heavily baited with dead fish and wait for the crabs to appear. Factors like the weather, the moon and predators like the octopus can affect the season's harvest. Stone crabs require careful handling too, the crab's major claw can deliver almost 15,000 pounds of pressure and once it grabs hold of something it rarely lets go.

Once caught the fisherman snap off the crab's major claw at the joint and returns the crab to the water where it grows a smaller claw to replace it. At the same time, its minor claw grows to twice its size and become next season's catch. Florida stone crab law does allow for both claws to be harvested if they both meet the minimum size, but most legit fishermen as well as the Florida Fish and Wildlife Commission recommend just taking one, so that the crab can feed and protect itself.

Stone Crab claws are boiled for eight to ten minutes (depending on their size) immediately after they are caught by the fisherman. Then, the claws are chilled for at least one hour. Before serving, shells should be pre-cracked. Most people find the easiest way to eat stone crab is with their fingers.

It takes four to five "medium" stone crab claws to make a meal for the average adult. Medium claws are roughly 2-3 ounces each so you get 6-8 per pound. Large claws weigh anywhere from 3-5 ounces apiece and there are 3-5 per pound while Jumbo weigh 5 ounces each or more, with 2-3 per pound. The price of stone crab claws depends on how plentiful the season is. In a "typical" year, medium-sized claws cost about $13 a pound. Large claws are around $18 and Jumbos are about $25 per pound. Some Florida restaurants sell close to 1,000 pounds per day.

Since most stone crab claws are eaten cold, the next step is to prepare a dipping sauce. You can always keep it simple with melted butter or lemon juice. The most common sauce is a mustard sauce. Here's how to whip up the creamy mustard-based sauce that was made famous by Joe Weiss, founder of the iconic Joe's Stone Crab in Miami.

Whisk 1 cup mayonnaise, 2 Tbsp. half-and-half, 4 tsp. dry mustard, 2 tsp. Worcestershire sauce, and 1 tsp. A.1. Steak Sauce in a bowl until smooth; season with salt and pepper, and chill. Serve as a dipping sauce with all kinds of crab.

Of course, you can always visit one of your favorite Sarasota-Manatee Originals area restaurants and enjoy your stone crab claws prepared for you. If you need some recommendations try these. (Always call first to ensure availability.)