With so much out of their control, upstart restaurant operators look to put a tight grip on challenges right in front of them. Like constant brand improvement. 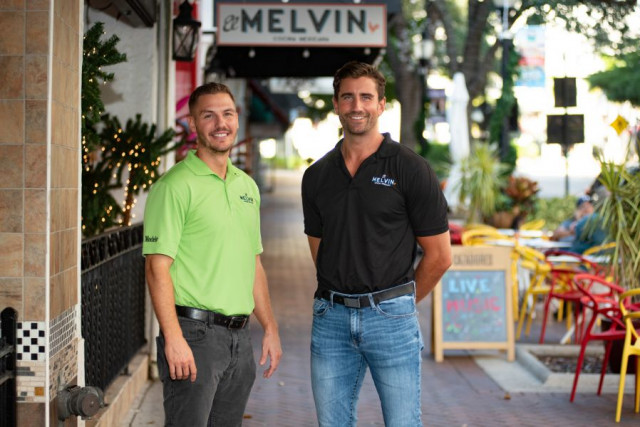 A significant amount of rookie restaurateurs don't even make it through year one in the notoriously difficult industry. So for childhood friends, business partners and first-time restaurant operators Mitch Good and Matt Hess, getting to 13 months with El Melvin Cocina Mexicana, on Main Street in downtown Sarasota, is sweet success. Doing that in a pandemic for more than half the time makes it only sweeter.

'Some restaurants go out of business when they get complacent and we don't want that to be us.' Mitch Good, El Melvin Cocina Mexicana

"It's a big risk," Good says, "but we went into this with the mindset that failure doesn't exist for us."

Now comes the next, even bigger challenge: Get through however long the pandemic lasts to become a sustainable fixture in downtown Sarasota's diverse foodie-centric restaurant scene. Dozens of restaurant owners and operators across the region, and nation, face similar challenges as 2020 winds down. Some won't even get that far: nearly one in six restaurants nationally — some 100,000 eateries — closed in the first six months of the pandemic, according to a National Restaurant Association survey. Those closures led to nearly three million job losses and the industry, the report adds, is on track to lose $240 billion in 2020.

Good and Hess, with at least $1 million on the line via savings and a loan from BB&T Bank, are determined to beat the odds and make El Melvin a mainstay. So much so the duo, considering the pandemic a time to reinvest, not retrench, is already thinking about expanding, including possibly opening a taqueria — a smaller joint hyper-focused on tacos. "Right now things are stagnant," Good says, "but we are investing for the future."

El Melvin is in the former Two Senoritas at 1355 Main St., a block of heavy foot traffic and heavier competition. Two Senoritas was a mainstay in and of itself, lasting 25 years. Good and Hess say their goal with El Melvin, named after Good's grandfather, Melvin Mitchell, is to create a brand around margaritas, tacos and an eclectic, but welcoming, atmosphere.


Lori Sax. Matt Hess, left, and Mitch Good opened El Melvin Cocina Mexicana on Main Street in downtown Sarasota in November 2019. El Melvin replaces Two Senoritas, which had been operating there for 25 years.
Good and Hess, along with Good's father Jeff Good, a silent partner, operate El Melvin as an S-Corp. Sarasota businessman and downtown property owner Chris Brown bought Two Senoritas — the restaurant and the building — from owner Cheryl Woodruff in August 2019. Brown kept the building and flipped the restaurant to Good and Hess. The new owners shuttered the place, then opened Nov. 14, 2019 under El Melvin. "We were off to a really strong start, and then the world stopped," Hess says, in an oft-heard 2020 lament.

Good, 31, with experience in food marketing and Hess, 32, who worked in commercial banking, have known each other since they were kids in Lancaster, Pa. They looked at hundreds of business opportunities — a FedEx route, a landscaping company and a signs business, among others — before connecting with Brown. "We wanted an established business with good management," Hess says. "And we wanted something with good growth potential," adds Good.

Hess and Good have learned several significant business lessons in their first year with El Melvin, including two big ones: control what's in your control and leave your ego at the door.

On the latter, early on they hired several prominent area hospitality veterans for consulting and advice. Mark Woodruff, owner of Made Restaurant, six blocks north of El Melvin on Main Street, was brought in to refine the concept and operations. Woodruff has a history with the restaurant: his father, John Woodruff, founded Two Senoritas. Mark Caragiulo, meanwhile, was brought in to help remodel and stage the interior, focusing on a Mexican Cocina ambiance. Caragiulo family operates several restaurants, including Owens Fish Camp.

"We had to be really humble and really good listeners," Hess says. "We hired all these consultants, we really wanted to listen and do what they had to say."

On the control what you can side, one example is Tropical Storm/Hurricane Eta, which led the partners to shut down El Melvin when it blew through the region Nov. 11. The owners, with weather out of their control, worked on a seven-hour deep clean of the place that day. "We're not business owners sitting behind the scenes," Good says "We are in it every day."

The core challenge going forward, of course, is the ultimate out-of-their control: the pandemic, or, more specifically asks Hess, "how can we get people feeling comfortable eating at a restaurant again?" While the whole industry grapples with that, the El Melvin duo, says Good, seeks ways to improve the brand and be nimble on new opportunities. "Some restaurants go out of business when they get complacent," Good says, "and we don't want that to be us."