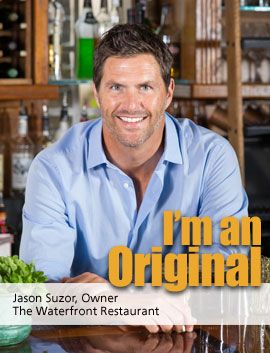 Before "sustainability" was entrenched in Southwest Florida's culinary vernacular, it was on the menu at The Waterfront Restaurant.

Jason Suzor, the owner of the Anna Maria Island eatery, has enriched his menu with locally grown ingredients since 2002. At that time, this eco-conscious concept wasn't particularly trendy in the area, but it was of paramount importance to Suzor.

"Over the years, we've done as much as possible to lessen our impact on the environment," Suzor says. "Most big chain restaurants could care less about that because it's too expensive; but to us, it's important and worth the cost."

Suzor developed this mindset during his lengthy career in the food industry. He bussed tables, cooked, served, and worked as a bartender and manager before becoming a restaurateur.

"Everyone loves food. It's a fun business," Suzor says. "We get the chance to create wonderful experiences for our guests and who doesn't like making people happy?!"

At The Waterfront, some of the dishes that make patrons happy include the char-grilled Bahi ribeye (a 16-ounce ribeye that is marinated for three days in Polynesian seasoning), the grouper tacos with jicama slaw, and the baked brie appetizer with orange blossom honey.

Much of Suzor's staff bikes to work at the restaurant, which is located at the end of a sandy, idyllic island. The vibe is laid-back, the food is fresh, and the carbon footprint is small.

"We are small, independent and proud," Suzor says. "We are fortunate to be a part of a group like the Originals that emphasizes the importance of independent restaurants. The word says it all: not overdone but small, unique and original. I wouldn't want it any other way."

Written by : The Originals